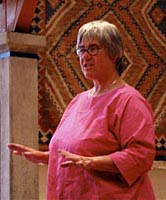 It was the day during the Summer Gathering when we were to draw from the collective and to focus on peace. We all went out to the labyrinth to do a Peace Invocation. The intention was to center on the world soul and to draw from that place of collective wisdom with peace as the focus. Following the invocation, much to my surprise, I felt led to return 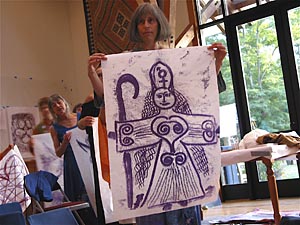 to the hall and draw there. As I walked back I reflected on my puzzlement that I would be led to draw away from the group and inside. When I walked into the room, I was attracted to the large drawing board. It can be intimidating for a non-artist to be with the large board. How would I ever fill up that big space? I found myself cutting ten large sheets off the roll of paper, thinking that there would be lots of paper left for others to draw. I might manage two drawings at most on that large board. 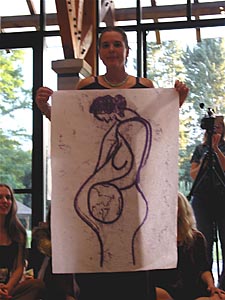 I rolled out my ink and took the first sheet of paper. It was the jagged end piece that I had cut off the roll first. I thought I would use it as a throwaway “warm-up” piece. I closed my eyes and allowed my hands to draw. Instantly, I was guided into a deep state of collective flow. When I pulled the paper from the board, the owl was there. Owl has always been an ally of wisdom for me. I knew I was about to receive more guidance. I put another piece of paper on the board. The next thing I knew it was an hour later and I was drawing a circle. I saw it was the end of a series I was barely conscious of drawing. 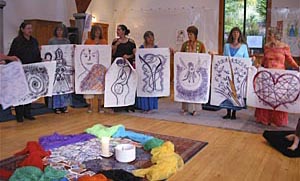 I expected that in touching into the collective of peace I would touch into the darkness and pain of the earth and our lives. Instead, I was left with a great sense of joy and hope. Hope is defined as a yearning with the expectation of attainment. I knew my sense of joy was a certainty that peace would prevail on earth. I felt that we can transform violence; that sentient beings and the earth itself with survive, indeed, thrive in the future. A heartfelt sense of consolation came upon me as I cried tears of joy to be given such grace on behalf of all of us.