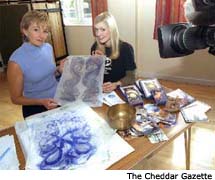 Touch Drawing was featured on the British BBC television program “Inside Out” last autumn (2003), a regional magazine style programme. It formed part of a trio of alternative-style classes and workshops on offer in the south west of the country, and showed Sue Mason and her friends Val, Shan and Suzanne demonstrating the creative and fun side of TD. “Interestingly the presenter was very cynical” explains Sue. “and it took me ages to get her to actually get her hands on the board. She just couldn’t see the point at all.”

However, once the presenter did start to play – she went straight into her inner child mode and kept going even after the filming stopped. Her film crew (camera man, producer and researcher) took their turn after filming and all fell in love with Touch Drawing. The researcher went home to buy her own kit. Happily, the end result came across well and although no direct bookings manifested from the piece, Sue is now able to add “as seen on BBC TV” to posters which have been boosting her local workshops.