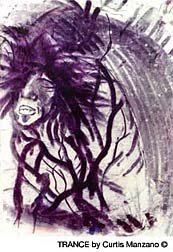 Curtis Manzano is a young man who is devoted to developing his creative work, despite very difficult home conditions. Joanne Hobbs met him as his computer graphics teacher and has mentored him as he enters his adult life. Curtis came to a Touch Drawing workshop and has now integrated the process into his artist practices. Sometimes he scans his Touch Drawings and enhances them on the computer. He has also gone on to present Touch Drawing to other At-risk youth. Here we share both his perspective and that of his mentor, Joanne Hobbs.

Curtis Manzano
When I first went to a workshop on Touch Drawing, I had no idea what the process was but I like doing art so I was up for it. After Deborah demonstrated the technique I was anxious to try it. I worked for several hours, nonstop doing one drawing after another. It was so easy—easier than using a pencil or paintbrush. The images just flowed out of me and I have been doing Touch Drawing ever since. I hope I can demonstrate it to more people because everyone who tries it, likes it. I have even sold some of the paintings and that is cool too. I sold one called Second Sight at my last 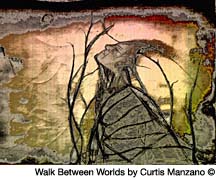 reception. The couple that bought it was an American Indian couple who said that they could sense a spirit in the drawing that was speaking to them in a profound way. It was someone they had apparently lost. I don’t know about that, but I do know that people respond to these drawings in a positive way. Another two drawings that I call Trance and Deer Man respectively seemed to be influenced by my contact earlier in the week with a Huichol shaman that I was supposed to take a trip with. Apparently the deer is the spirit or totem of their tribe as well as the guide and muse for their visionary art. I didn’t know this at the time. The deer just emerged during a touch drawing session. My mentor is helping me find the opportunities to demonstrate Touch Drawing to kids my age. I would like to do more of that. Once they get past drawing the kinds of things they see every day on the streets, they do some interesting things. 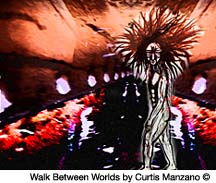 Joanne Hobbs
I work with at risk teenagers and young adults. My goal is to bring the process of Touch Drawing to them initially via Curtis, the twenty-year old young man who was the catalyst for my work with this population. The technique’s ease of use and paradoxically powerful process for bringing what is inside, out, for reflection and healing makes it an ideal tool. This past spring I watched a group of young men from Watts, California gather around Curtis as he demonstrated Touch Drawing. Then I saw them begin their own drawings, merely scratching the surface at first, drawing the graffiti letters and whimsical characters so popular with this generation. They looked around nervously as though afraid that they were not doing it the “right way.” Curtis acknowledged their first efforts while pointing out how to follow and then accentuate the marks they made on the page, mixing imagination with intuition. Soon the boys began to move deeper—perhaps because they had permission from one of their own to go beyond the popular art forms that surrounded them. Their drawings took shape, each one unique, reflecting the contours of their psyche. When the session was over, they gathered together in a circle and shared a few drawings that they particularly liked. The level of sharing and trust established during the session, a tone set by Curtis right from the beginning, carried over into the discussion and each one eagerly took materials home to continue their exploration. I knew then that I would have to find grant money to fund bringing Touch Drawing to this population—young men and women who are hungry for tools that help them make sense of their experiences and that teach them about the inner landscape.