By Susan Jackewicz in collaboration with Victoria Domenichello-Anderson VICTORIA_ANDERSON6@msn.com
Along with Kathleen Horne, Victoria started the Art and Healing Certificate program at the Ringling School of Art 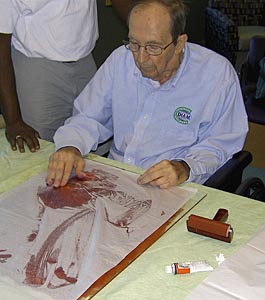 This pilot program evolved from a group of Parkinsonians called The Hodgepodge Painters, founded by caregiver Susan Jackewicz for her mother who has lived with the disease for 12 years. The members gathered weekly for painting sessions on canvas board using tempera paints, brushes, sponges, and sometimes, fingers.

After some time the Hodgepodgers scattered. Parkinson’s doesn’t take a vacation, and being acutely aware it is a degenerative disease, Susan started looking for other avenues to bring Art to the Parkinson’s population. She connected with Victoria who suggested trying Touch Drawing. 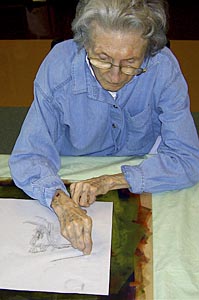 We weren’t certain the Parkinsonians would take to this unfamiliar technique, but took a leap of faith and gathered 7 Parkinsonians and their caregivers for a 5-week Pilot Program under the auspices of the Ringling School. HealthSouth offered meeting space and volunteer session aides. 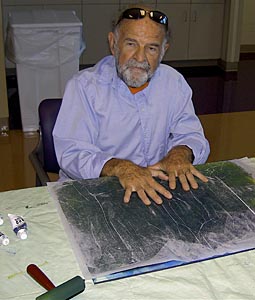 The results were remarkable. We found the physical process of Touch Drawing simple, accessible, and engaging across the board – for those who had had previous art experience, or not, for those with higher or lesser motor disabilities, for accomplished adult men who might otherwise look askance at such an “activity”, and for the caregivers, who are all living under varying amounts of acute stress.

For the Parkinsonians, post-trial comments such as “He was so much calmer the rest of the day”, and “Her movements were easier for hours afterwards” pointed to the respite-like effect of the sessions… a very important effect in this disease 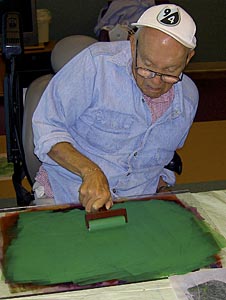 which causes constant, uncontrolled movements usually harnessed only by continuous medication. It’s theorized the creative act and its meditative component mimic dopamine’s action causing a reduction or temporary cessation of errant Parkinson’s motor symptoms, and that creativity is not affected by the disease. This was illustrated recently at the World Parkinsons Congress in Washington DC in February 2006 with an extensive exhibit of Parkinsonian art, which can be seen at www.pdcreativity.org.

For the caregivers, the sessions not only provided much-needed quiet time away from normal responsibilities, but the technique of Touch Drawing was an immediate vehicle to whisk away into focus on their own, rather than their loved one’s, energies.  There were many “lightbulb” moments:  “I’m not as in touch with my feelings as I thought”, “This is so relaxing, I need to go get massages regularly”,  “I miss my sister’s help more than I’d realized”. Quiet tears of stress relief were common, as were joyful expressions of  playful abandon.

Everyone, from Parkinsonians and their caregivers, to nursing aides, facilitators and administrators agreed the Pilot was a success. Ringling School and HealthSouth have committed to hosting continuing sessions this fall to a wider group.